Time to resurrect this effort I think. Articles and piccies to come as soon as.
Posted by Roger at 21:27 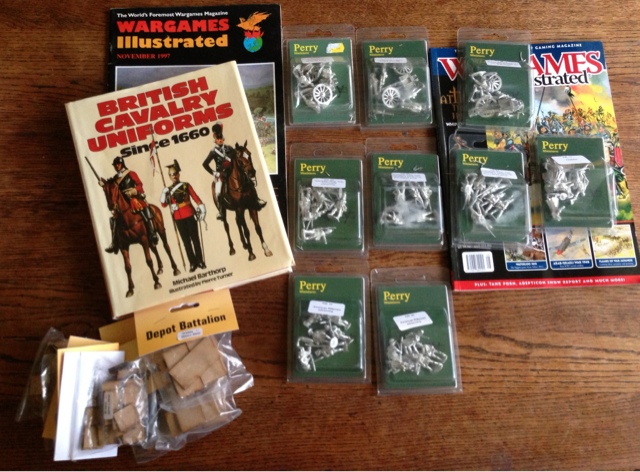 A tiny show tagged onto a participation event but lots of potential. Dave Thomas managed to provide the requisite Perry's AWI purchases:
Ralls Grenadiers
American Riflemen
British 6lb / Continental 6lb
Civilians
Colonel Bill provided the bases though I was annoyed to find that these required additional finishing/filing due to poor punch cutting. Though at a £1 a bag they are pretty reasonable value.
Overall a good haul for a smaller event.
Posted by Roger at 10:02
Labels: Britcon 2013 buys

What a good way to start the weekend. We went up to Newcastle the night before and stayed in the Jury's at the Quayside. The Friday was spent doing the Baltic Centre, and when I say doing, I mean Kay went round and I had a coffee in the cafe reading Battlegames. Then we went off for a curry at the Rani just over the bridge which gets highly commended in my books.
Reiver overall next morning was very good with a nice big venue and a fair number of stalls. The usual suspects were represented - Curteys, Colonel Bill, Pendraken, Perrys etc.
There were a few demonstration games including one which caught my eye - Westerhope Wargames Group's Battle of the Henge 43AD. A game based on the Roman invasion of Britain. The game utilised figures cast using the Prince August moulds as well as having Westerhope's own rule set.
I had a long chat with one of the gamers ?John regarding the pros and cons of casting your own figures and must say was quite impressed by the potentials of such an approach. I will definitely consider it as my Roman/Ancients forces progress. The amount of of figures and bright attractive painting made for a very impressive table. With the solid front ranks of the Romans being harassed by a large flock of chariots. I thought the henge looked great, I might have put it centre stage though, potential there for a skirmish game I think.
Overall the venue itself was large and had plenty of parking and was well connected to the roads. A minor quibble was the lack of hot food on site. I believe the venue was new to the event so I am assuming there was some sort of mixup? I do appreciate the opportunity to get a bacon butty if possible. 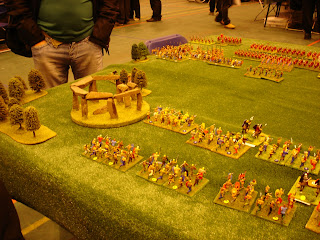 This scenario 'hinges' on the ownership of this henge!
﻿﻿﻿﻿

Figure painting for the event is now well under way though it will be a tight pinch to get everything done in time.
I have started by painting up Pike Block and then supplementing this with crossbows, bows and 'handgonnes'. The Pike will be targeted towards the Swiss who seemed to have provided mercenaries across Europe for the period. The crossbows will be Italian, longbows - English and potluck for the rest.
My main aim with the painting is to try and use the Library figures as a springboard for establishing a Renaissance Dogs of War 28mm army, the sort of Great Company force fielded by Condottieri like Hawkswood or Cesare Borgia. However at the moment the forces fielded will be quite small and focus on foot troops. From little acorns...
I must say that I found the photography article in WI this month very interesting and useful when prepping for this blog. I will be looking at setting up a little photography station to snap my figures a bit more regularly.
﻿ ﻿ ﻿ ﻿

Well its been a few years since I've ventured as far West as St Helens for a wargames show however I'm glad I made the effort. As well as being a nice opportunity to come over and see family it was a chance to re-sample a show which I have not attended since the late 90's. With a large venue at Sutton Community & Leisure Centre with a decent cafe and bring-and-buy we were not disappointed. The £3 entrance seemed very reasonable considering the large venue, number of demo games and good representation of traders.

I was pleased to see that Yorkshire was well represented with Tim, Peeler and Rich all making the trip over.
I particularly enjoyed focussing in on the 16th/17th Century wargames on display this time round.
Always a bit of a sucker for the 'period-of-the-moment' I've found myself increasingly drawn towards the English Civil War and the Thirty Years War which have been receiving increasing coverage via the Field of Glory Renaissance Rules supplements and the new Warlord Pike & Shotte rules.
I immediately homed in on Manchester's The Mailed Fist presentation of The Battle of Edgehill which with a 12' x 6' table and large number of figures dominated a corner of the hall. A friendly combatant was kind enough to talk me through the battle and how the new system was operating. The rules seemed to cover many of the major armies, formations and were a welcome update to an earlier adaption of Black Powder. I look forward to trying the rules out myself at some stage in the future.
Another game that drew me was the Lance & Longbow Society's recreation of the Battle of Ravenna again in 28mm though from the other end of the timeline - 1512. I had a very pleasant chat with a gentleman regarding the ins and out of long distance wargaming and his 1840s campaign.

I've included a few photos for reference, apologies for the quality. I endeavour to bring a decent camera in future.

Overall not a big spend by comparison to recent shows. I was tempted by a £14 History of the Thirty Years War and Gustavus Adolphus' Infantry Osprey books from Caliver. Unfortunately I was not able to obtain the 20 figure movement trays I was after this time, better luck next time. Britcon or the Other Partizan I think. 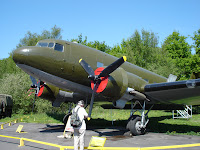 This was as enjoyable as ever with a wide variety of vehicles on display together with a small collection of wargame traders and miscellaneous others. My personal favourite was Colonel Bills at the entrance to the main hangar and the AW miniatures stand. It was good to see Rich, Tim and Alex at the show and I enjoyed the playtest of Normandy Firefight which is a complex set of rules for man-on-man WWII skirmish. I agree with Tim that it is a bit challenging with more than a few figures and will require some adaption for squad use. Though this is probably going a bit beyond its original concept. Ideally it would have worked better with a larger group of players.

Assorted Purchases:
I look forward to seeing folks at Wartorn, though I hoping to attend Phalanx at St. Helens first. Anyone heading West for this? 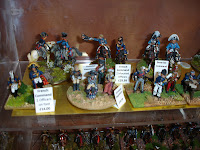 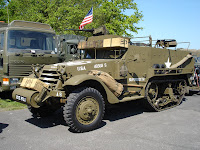 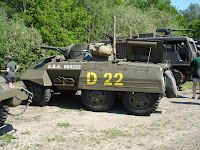 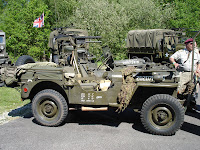 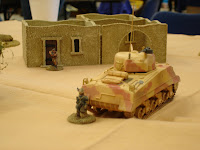 Bit of a setback with basing, chunky GW bases were spoiling look of Romans so I have de-based and replaced. A nuisance but they look a bit better. Still trying to perfect basing technique. Basetex, drybrush and flock I think but not sure. Desert bases easy , European a bit of a nightmare.


- Posted using BlogPress from my iPhone 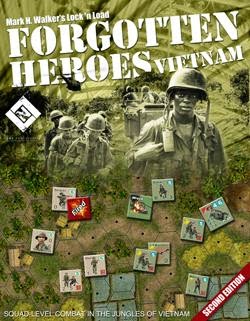 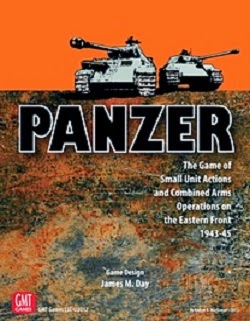 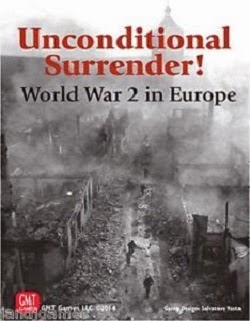